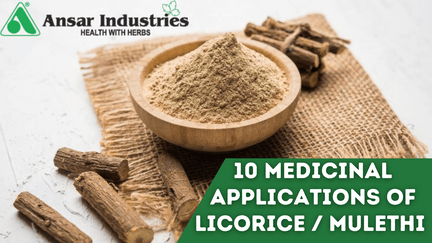 Liquorice is a purple and white flowering perennial that is native to the Mediterranean and Central and Southwest Asia. The sweet taproot, which grows to a depth of four feet, is widely cultivated (1.2 m). Liquorice is also known as sweet root because of its sweet flavor. It's known as yashtimadhu in Sanskrit, with 'yashti' meaning stem, stalk,and madhu' meaning sweet.' Mulethi is the Hindi word for liquorice. The root is tough and fibrous, round, long and straight, and perennial. It's grayish on the outside and yellowish on the inside. And the cortical has the most desirable qualities.

The Ansar industry is known as a prominent supplier of Licorice / Mulethi.

Liquorice/Yashtimadhu Health Benefits Liquorice was traditionally used as a medicine rather than a spice. The root is the most important part of the plant for medicinal purposes. This root is a demulcent and gentle relaxant that soothes mucous irritations and is prized for its sweet flavor and ability to mask the sharpness, pungency, and taste of other remedies. The root is recommended by Ayurveda for colds and other bronchial irritations.


Aids in the treatment of skin issues Liquorice can help with eczema, skin rashes, psoriasis, and itchy, dry skin. Liquorice's demulcent and anti-inflammatory properties have been shown in studies to reduce the symptoms of atopic dermatitis (eczema). Applying a concentrated extract made from liquorice root to the affected area twice or three times a day can help to alleviate skin problems. Liquorice root extracts are widely used in sunscreens as a botanical agent.


Liquorice is used to treat upper respiratory tract diseases. Liquorice is an effective expectorant according to Ayurveda, as it helps to liquefy mucus and facilitate its removal from the body. People with asthma or chest colds who have tight coughs or difficulty breathing benefit from liquorice's expectorant effect. Glycyrrhizin-containing liquorice can be used to treat respiratory infections. It can also be combined with fresh ginger for colds and respiratory problems.


Assists in the Treatment of Digestive Disorders Digestion and intestinal problems such as dyspepsia (heartburn), stomach distress, bloating, and indigestion are all treated with liquorice root extract.

Powdered liquorice is also used in Ayurvedic medicine to treat hyperacidity and constipation, and clinical trials have shown that it is effective in reducing pain, discomfort, and other symptoms caused by stomach acid. It is more effective than alkalis at removing the irritating effects of acids. Furthermore, the aglycon liquiritigenin has been identified as liquiritin, a flavonoid glycoside that forms spontaneously when the root is dried. The spasmolytic properties of liquorice are due to this. It's a gentle laxative that calms and tones the mucous membranes.

Because the flavonoids in deglycyrrhizinated liquorice (DGL) are unaffected by the removal of glycyrrhizin, it can be used to treat digestive ulcers. Helicobacter pylori, the bacteria that causes most stomach ulcers and inflammations, is known to be killed by flavonoids.


Liquorice flavonoids aid in the reduction of excessive fat accumulation in the body. People who took 900 mg of liquorice flavonoid oil daily for 8 weeks had lower body fat, body weight, body mass index, and low density lipoprotein (LDL) cholesterol levels, according to a study published in the Obesity Research and Clinical Practice journal. Another study discovered that applying glycyrrhetinic acid (a component of liquorice) to the thigh reduced fat thickness. Long-term use of liquorice, however, carries a number of health risks.


Menopause Issues are Reduced Liquorice has estrogenic properties that are similar to those of other phytoestrogens. It can boost estrogen production and counteract the negative effects of too much estrogen, particularly from external sources. Liquorice Pills May Aid in the Prevention of Hot Flushes Liquorice root's phytoestrogenic action is beneficial for hormonal issues such as hot flashes, exhaustion, and mood swings in women going through menopause.


Liquorice's antibacterial and antimicrobial properties may help to prevent cavity-causing bacteria from growing, reduce plaque, combat bad breath, and keep teeth and gums strong and healthy. Liquorice root extract, according to a study published in the journal Anaerobe, aids oral health and can be beneficial when used in oral hygiene products such as toothpaste and mouthwash.


Antiviral And Antibacterial Ingredients Liquorice has antibacterial and antiviral properties as well. The action of glycyrrhizin in liquorice is similar to that of adrenal cortex hormones, particularly desoxycorticosterone (DOCA). Glycyrrhizin is converted to glycyrrhetinic acid in the liver. Interferon, a potent antiviral compound produced naturally, is activated by both of these compounds. When interferon is turned on, white blood cells and killer T cells in the immune system kick in to help the body fight cold viruses and herpes simplex. Liquorice's antibacterial properties are attributed to flavonoids rather than glycyrrhizin.


Liquorice also has anti-inflammatory and anti-allergy properties. This is because it affects the adrenal glands, which are in charge of producing cortisol, the body's natural corticosteroid. Prostaglandin production, another component of the inflammatory process, is inhibited by glycyrrhizin.


Other types of inflammation that can be treated with liquorice include arthritis, allergic disorders, asthma, chronic fatigue, depression due to hormonal imbalance, emphysema, and hypoglycemia. Because it speeds up the healing of the stomach lining, liquorice root, particularly deglycyrrhized liquorice, can be a useful adjunct to antibiotic treatment.

Ansar Industries, a pioneer in

, was founded in 1969. By providing a wide range of dry extracts,

, and soft extracts, we have modernized Ayurveda's 3000-year-old medicinal knowledge in India. Ansar Industries does not use chemicals or artificial processes because it is a family business with strong values at its core. We have played a significant role in popularizing the benefits and use of herbal extracts on a global scale, with ISO 9001:2015, GMP, FDA, and FSSAI certifications. Ansar Industries is a well-known